The Harm Caused by Poorly-Designed Piping

The design and positioning of the pipes on an industrial pump are extremely important. Poor design can be a cause of poor performance and a shorter life of your pump. 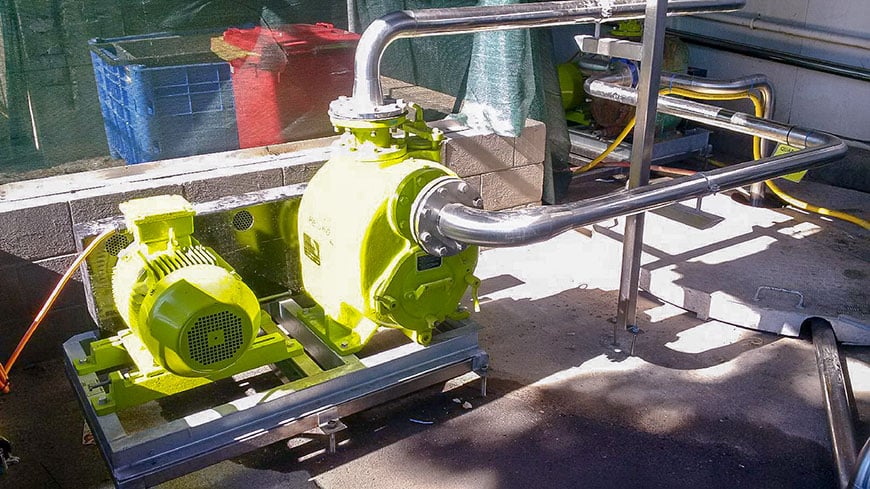 We have covered off in previous blogs on why your pump suction pipe is important and typical suction line recommendations from various manufacturers.

The piping’s job is simple: to house the liquid to and from the pump. If the pipe set up is properly designed, it will not affect the performance of the system. But several types of damage and poor performance can result from poor piping design.  Let’s outline these.

Probably the most frustrating, flagrantly-bad type of design is one with an inverted U shape in the piping on the suction side of the pump. Again, all the piping needs to help the liquid or similar material along its path.  Pumps push material, and this can be compromised if the piping doesn’t bring it to the pump correctly.

Ideally, the piping should be sloped downward, unless your pump has a static lift, which would call for an upward slope. Unnecessary turns in the piping, including those requiring u-shaped fittings, will cause pockets in which there is no liquid, but instead trapped air.

When this happens, vapour is created, and this, instead of liquid, travels through your pump. What then happens is that when the flow reaches the impeller, which is what powers it into the delivery pipe, it implodes.  This results in a problematic condition called suction cavitation.

First, off, a basic definition. Cavitation is the formation and imploding of vapour bubbles. This implosion of bubbles carries with it energy, and this can bash away at the pump housing near the inlet. This will also eventually take actual chunks out of the impeller.

You’ll know you’re falling victim of cavitation when you hear rumbling sounds, almost like shoes bouncing around inside of a clothes dryer.

The fix for this would have to be a redesign of the piping itself, so that it is straight as it leads to the impeller. No elbows right on the suction side of the pump, you should have at least five pipe diameters of straight piping leading to the impeller.

Another way in which liquid can be caused to change direction is with a “T” fitting that creates a 90-degree angle.  As with a U-shape, these shouldn’t be placed just before the inlet of the pump.

Cavitation is a large version of—or result of—turbulence within the pump. In less-common cases, you could run into discharge cavitation. This is a problem in which the discharge liquid—flowing out of the pump—is at too high a pressure and doesn’t flow out of the pump, spinning around inside of it instead.  This wears down the pump housing and impeller tips.

This gives you an idea of how important it is to have piping for your pump that is designed and installed properly.

If you are having any issues with your pump not performing correctly, please contact the team at Global Pumps who will be able to analyse your system.